1. Uber established its onshore E-Commerce Operation in Taiwan since Dec. 2020

From May 2017 till the above onshoring policy took place, Uber had operated its taxi and delivery services based on the “cross-border E-commerce” model; that is, the kind of model that Netherlands Uber B.V. signed contracts with local consumers and suppliers and matched the transactions via digital platform and mobile APPs. The cashflow was handled by cross-border clearance mechanism. The following Figure 1 and 2 demonstrate the differences between two business  structures before and after the onshoring. 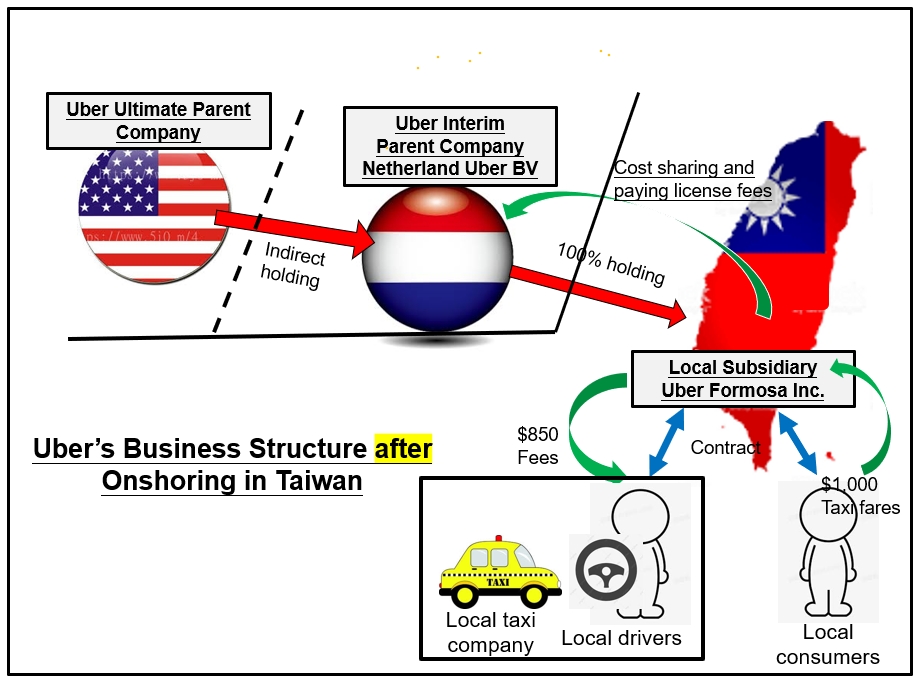 Uber emphasizes the alleviation of consumers’ cross-border payment costs as a major benefit after onshoring. The onshoring itself may also indicate that the taxi and food delivery businesses are quite price-sensitive in Taiwan and consumers tend to compare cost-performance between similar service providers. As a matter of fact, Uber faces fierce competitions with local service providers such as “TaiwanTaxi” and localized international brands such as “Foodpanda”. TaiwanTaxi and Foodpanda also operate under the same digital business model. Therefore, onshoring may bring Uber with an equal footing to these local and localized players on market competition as well as tax burden and compliance costs.

From the first day when  Uber started its local business, the simplified cross-border E-commerce VAT regime was no longer applicable. Uber shall then calculate VAT payables in accordance with the multiple-stage VAT regime as the other Taiwanese companies,  collect inward VAT invoices (the “GUIs”), and then deduct input taxes from the output ones. The multiple-stage system further enables Uber to issue outward GUIs to consumers with a sales amount according to platform usage and delivery charges, which are netted off the taxi and food prices. Moreover, Uber is relieved of the responsibility to issue eGUIs to taxi passengers according to a special article of GUI bylaws which favors local taxi service providers. As for B2B and food delivery businesses, Uber is required to issue GUIs to buyers as a normal VAT business.

Before onshoring, Uber was neither paying corporate income tax nor subject to withholding tax regime for its B2B and B2C sales in Taiwan. That is because Uber had operated under the name of Netherlands Uber B.V. without a local permanent establishment in Taiwan so that Uber was subject to the business income exemption clause of Taiwan-Netherlands Tax Treaty (the “Tax Treaty”). The revenues earned in Taiwan were consolidated to the Netherlands Uber B.V.’s income tax statements before onshoring.

After onshoring, Uber performs business activities through  the name of Uber Formosa subsidiary company instead. The business operator- Uber Formosa subsidiary is then deemed as an independent entity subjected to normal income taxation, bookkeeping, and filing standards; the same as the other local competitors. The after-tax profits generated in Taiwan will be subject to a 10% withholding tax if it repatriates      to the Netherland’s parent Uber B.V. and is subject to the Tax Treaty. Any losses incurred in Taiwan are also applicable to a 10-year carry-forward. The onshoring’s change also brings convenience to deal with local suppliers and business clients since the Taiwanese subsidiary can issue outward GUIs so that their application for withholding exemption is no longer necessary.

Before onshoring, the transfer pricing (“TP”) arrangements related to intangibles were made between Uber B.V. and its licensor enterprises within Uber group. An intellectual property (“IP”) arrangement was not necessary to Uber’s former subsidiary in Taiwan because it had performed only auxiliary and preparatory functions before onshoring. However, Uber Formosa subsidiary becomes the business operator and users of corporate IPs after onshoring, TP issues shall then arise. See the red-circled part in the following Figure3.

Figure 3: Uber’s IP license structure before and after Onshoring in Taiwan. Source: Author

To operate Uber’s taxi and food delivery business in Taiwan, Uber Formosa subsidiary has to use and properly compensate for the      trademark, brand name, APP software, access to global platform and its technology and know-hows owned by the Uber group. However, in light with the market competitions in Taiwan, there are several elements to be taken into consideration for TP purposes, especially when choosing uncontrolled comparables and pricing methods:

5. Onshoring as a business alternative for cross-border E-commerce

Uber’s decision to onshore its operation in Taiwan may set a positive example and reveal a trend for cross-border E-commerce operators to have closer contact and faster reaction with the end-users. As for the tax perspectives, business onshoring also streamlines VAT and income tax calculation and compliance costs while leaving more reasonable profits taxable in the market jurisdictions. Onshoring can be a smart strategy to neutralize the challenges from OECD /G20’s proposal of global digital and minimum taxation.

Associate Professor in Tax and Legal